Ambulances back in Solihull 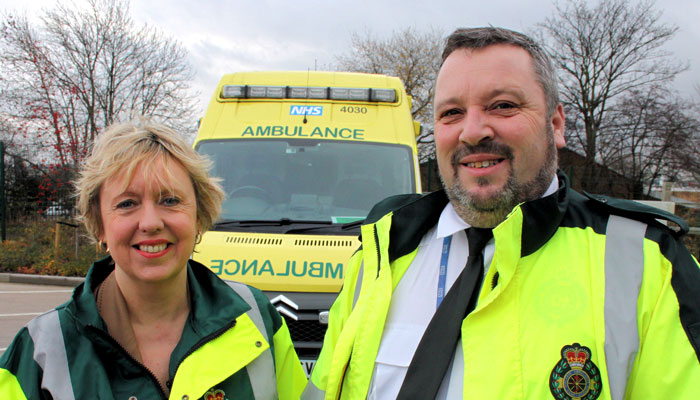 A new ambulance station has been installed at the hospital with facilities for two Double-Crewed Ambulances and 20 staff. West Midlands Ambulance Service has promised to later increase the number of ambulances to three.

During her campaign Mrs Burt raised the issue with the Prime Minister in the House of Commons. She personally met Health Minister Lord Howe and the Chief Executive of West Midlands Ambulance Service, Dr Anthony Marsh, to lobby them about her concerns.

Mrs Burt said, "I'm delighted that West Midlands Ambulance Service have responded so positively to my campaign to restore Double-Crewed Ambulances to Solihull.

"It's especially good news for local residents that we have the ambulances in time for the coldest months. Icy roads and winter bugs will mean their services are really appreciated.

"I hope local residents will have reassurance now that an ambulance will be nearby if they need help."

Dean Jenkins, the Trust's Area Manager for the North of Birmingham, said, "When we introduced Make Ready we always said that we would monitor the situation to ensure patients got a better service than the previous arrangements.

"In line with that commitment, we have opened this new facility to further enhance and refine Make Ready and the service we provide to patients.

"The new community ambulance station is a far cry from the old facilities at Hermitage Way just around the corner, and brings the Service into the 21stCentury. Thank you to Solihull Hospital for their hospitality and providing us with the facility.

"Whilst it has been disappointing to experience delays in completion of this project, our staff who are now based there have been very patient and we now look forward to further improving our cover in Solihull."

"We as a hospital were very keen to make this happen to support WMAS to improve outcomes for patients needing to use the service. Having the ambulance service presence on site will be a further boost in our commitment to provide safe care for residents of Solihull and the surrounding area."