Ambulances set to return in August

Double-Crewed Ambulances are set to return to Solihull this August. 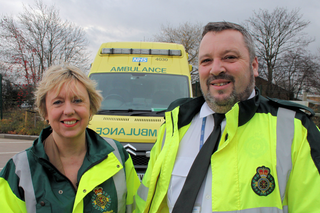 Double-Crewed Ambulances were withdrawn from Solihull last year and have since been operating from a base in Erdington, but ambulance managers agreed to return them following a campaign by MP Lorely Burt.

The ambulances were due to return in January. However, the old ambulance station on Hermitage Road has been closed so a new site is needed. Negotiations with Heart of England Foundation Trust to base ambulances in Solihull Hospital are still ongoing.

Local campaigning group Healthwatch Solihull had written to West Midlands Ambulance Service asking them to ensure the issue was dealt with at a board meeting on 27th May.

However, it was revealed at a public meeting in Dorridge organised by Healthwatch that the decision was low on the board's agenda and the meeting concluded without discussing it.

Dr Anthony Marsh, the Chief Executive of West Midlands Ambulance Service, has written to Mrs Burt to reiterate his commitment to basing Double-Crewed Ambulances in Solihull Hospital and stating his 'confidence' that ambulances will return by August.

The trust plans for two 24-hour ambulances based at Solihull Hospital, eventually rising to three.

Mrs Burt has written back to Dr Marsh, welcoming his commitment but expressing concern at the delay and requesting assurances that Solihull's Double-Crewed Ambulances will not be allowed to slip from the agenda in future.

She has also written to Dr Mark Newbold, the Chief Executive of Heart of England Foundation Trust, asking him to give support to the plans.

Mrs Burt said, "I thank Dr Marsh for his commitment to return our Double-Crewed Ambulances by August, and I will hold him to it.

"Residents have the right to be frustrated with a process of removing and then returning our ambulances that has not gone smoothly. There has been a lack of clear information and little sense that a properly thought-out plan was in place.

"I understand that some of these delays are caused by difficult negotiations with Heart of England Foundation Trust.

"I'll be putting pressure on the foundation trust and the ambulance service to get their act together and really deliver this time."

Sam Mills, Chair of Healthwatch Solihull, said, "It's fantastic news that a timeline has been established for bringing back our ambulances, which is what we all want to see happen.

"We've got to ensure there are no more delays and that the ambulance service deliver on their promises this time and don't miss this new deadline."