Solihull Liberal Democrat MP Lorely Burt has given Jaguar Land Rover a dossier of incidents in which lorries supplying the car manufacturer have been caught driving on Damson Parkway. 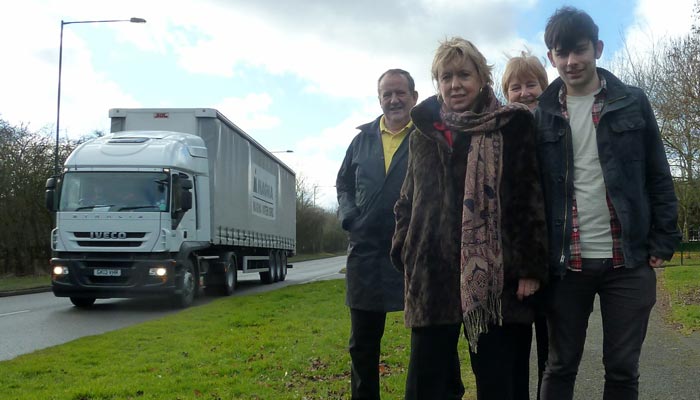 Lorry drivers have been instructed to turn left when they leave Jaguar Land Rover’s north east entrance and proceed straight to the A45. However, many are still turning right and driving along Damson Parkway which is a residential area.

This causes major traffic problems and disturbance for local residents.

“Jaguar Land Rover have promised to look into reports of lorry drivers taking short cuts at local residents’ expense. I am now taking them up on this welcome offer.

“A number of residents have contacted my office to let me know about lorries they have caught driving on Damson Parkway and I have now submitted these details to Jaguar Land Rover.

“I would encourage local residents to keep on contacting me so we can let these drivers’ bosses know what they are up to.”

“Some of the logistics companies, particularly DHL, have made a real effort to crack down on miscreant drivers and protect local residents.

“However, it’s clear that we have not had success across the board and some continue to misuse residential roads with impunity.

“Heavy goods vehicles contain satellite trackers so it should be a simple matter to track down offenders and seek disciplinary action.”

Lorries driving on Damson Parkway can be reported to Office of Lorely Burt MP, 81 Warwick Road, Solihull B92 7HP or burtl@parliament.uk. Residents are asked to give as much detail as possible, including the time, date and if possible number plate of the lorry in question.