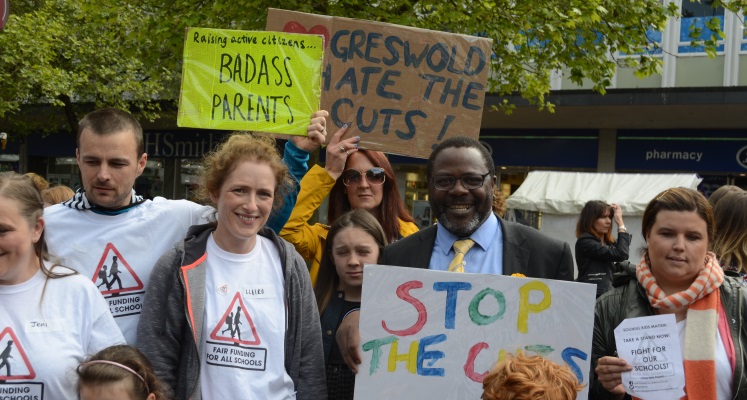 Your prospective Lib Dem MP has been working hard to fight the unfair allocation of funding for Solihull’s schools. At a Fair Funding for Solihull Schools protest meeting in Mell Square on Saturday 20 May, Ade said:

“It is so important that Solihull has an MP who is committed to funding Solihull schools fairly. Solihull does not deserve an MP who simply does as Theresa May says and continues to deprive our schools of funds. Solihull’s children and teachers deserve better. If elected I will not keep silent in Westminster when these savage cuts are discussed.”

Ade has taken this cause to the top of his party, and welcomed Lib Dem leader Tim Farron to Solihull to meet with local schools campaigners. Ade said:

“You may have read in the local press, or seen on the national news that I invited Tim Farron to meet with schools’ campaigners here in Solihull as we fight to protect their schools.” 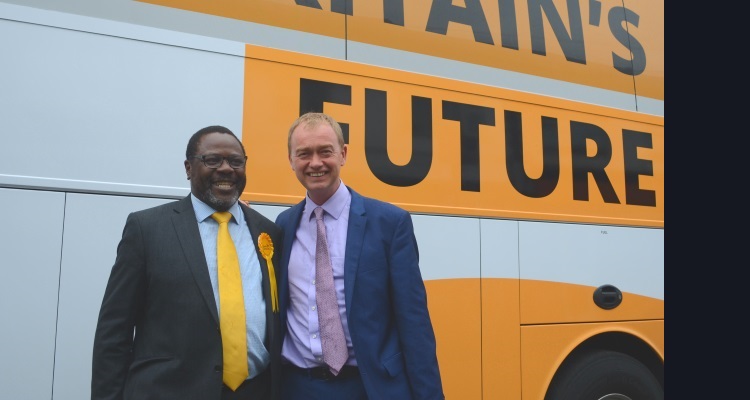 Tim Farron paid a flying visit to the Happy Hearts Café in Olton on Monday 15 May where he met with Claire Melia, Jeni Mills and Lisa Evans, who are all parent governors from our local schools campaigning against Government cuts to education funding. Tim agreed to endorse the campaign as the Lib Dems already recognize that our schools are in crisis, facing cuts to their budgets of £11.8 million by 2019. We will be losing more than 300 teachers and spending per child will reduce by at least £350. The Lib Dems are challenging the Conservatives’ unfair allocation of funds which is starving our schools of cash.

The campaign representatives explained that schools are facing problems on many levels; the lack of cash means that buildings are crumbling, new equipment cannot be bought, sports provision and special needs cannot be met. Teachers and parents are increasingly being asked to plug the gap and our schools are now at breaking point. All this is at a time when there is a bulge in child numbers due to higher birth rates.

“There has been a particular problem in our area as we have been in the lower quartile for the funding formula and have therefore been given less money per pupil than, say, Birmingham has received.”

“Obviously we support children from disadvantaged backgrounds getting more funding, but the overall budget for schools needs to be increased because there’s not enough there in the first place. Some schools are also having to narrow the curriculum because of these cuts, so children are not getting the broad education that they deserve.”

“Teachers do a brilliant job. Liberal Democrats will invest £7billion in education and we oppose this destructive Conservative policy.”

Read in full what Ade said at the Schools Cuts demonstration in Mell Square on Saturday 20 May:

"On Monday, I welcomed Tim Farron, to Solihull. He came to support my campaign, and I bought him along to support your campaign.

What better way to show you that the Liberal Democrats are committed to funding schools fairly.

It is so important that on June 9th Solihull has an MP who is committed to funding schools fairly. If Theresa May gets her wicked way, she will be returned with an even bigger majority. This will not help Solihull schools. Solihull does not deserve an MP who will simply do as she says. This will continue to deprive schools of funds. Solihull's children and teachers deserve better from us.

There are people here today who hold similarly high ambitions for schools in Solihull; but I put myself forward, as someone who has already taken this issue to the very top of his party, and who will not keep silent in Westminster when school funding once again is subjected to savage cuts and more unfairness.

I want you to continue to tell the people in authority that what they are doing with your schools is not good enough, and I want you to know I will support you in that. Solihull schools deserves better!"