Local MP Lorely Burt has called on Solihull residents to give generously while selling Remembrance Poppies outside Sainsbury's on Poplar Way. 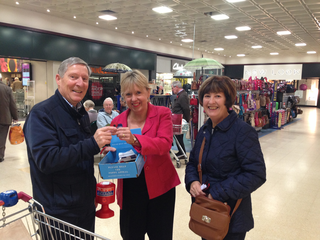 The Poppy Appeal is a major source of income for the Royal British Legion, which offers financial, social, political, and emotional support to members and former members of the armed forces and their dependants.

Sainsbury's Solihull Store Manager Mark Jacques said, "The Solihull community has been so supportive in past. This year we commemorate the start of the First World War and our 20th year of partnership with the Royal British Legion. I'd like to thank our customers for their kind donations and the support Mrs. Burt has shown."

Mrs Burt said, "I was touched by the generosity of local shoppers. It's absolutely right that as we honour the dead on Remembrance Sunday we don't forget the living. That's what the Royal British Legion is all about.

"Young men and women in our armed forces risk their lives every day to keep us safe. Many come back with permanent physical or psychological wounds - and some don't come back at all. The toll on their families can be huge.

"People in Solihull rightly want to pay tribute to the suffering and sacrifice of our armed forces, past and present. I would encourage anyone who hasn't yet donated to the Poppy Appeal to do so without delay."