More money for apprenticeships in Solihull

Businesses and workers in Solihull are set to benefit from more money from the government to support apprenticeships. 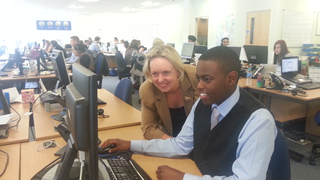 The coalition government is extending the Apprenticeships Grant for Employers by two years until 2015-16, providing £85 million extra to cover it. The Grant is worth £1,500 to employers for every apprentice they take on, up to a maximum of 10.

Solihull Liberal Democrat MP Lorely Burt is urging local business leaders to make the most of this opportunity while it lasts.

Mrs Burt said, "Apprenticeships deliver fantastic value for employers while getting young workers on the wage ladder and giving them skills to set them up for life.

"I am very pleased to see that support for them is being extended and I would strongly encourage local businesses not to waste this golden opportunity."

PPS Works, a recruitment company based in Shirley, took on their first apprentice in Summer 2013. Director Debbie Edmondson said, "PPS have found recruiting an apprentice into our business to be really valuable.

"Alvin has grown and developed in his role, taking on more and more responsibility with each month he is with us, gaining exposure to a broad variety of business principles. Moreover, he has proved his ability to work well independently and as part of a larger team - a strength which will no doubt benefit his future career aspirations.

"With the recent news that funding for apprenticeships has now been extended, we would strongly encourage any local business to consider recruiting apprentices. It has been a really positive experience for PPS."