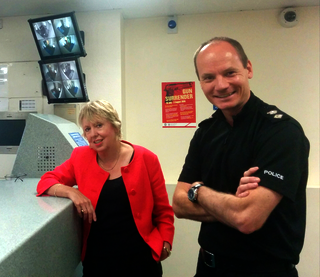 CH SUPT Alex Murray told Mrs Burt that his officers and PCSOs still have regular surgeries around the Solihull area and he will consider changing the locations of those to see if they can be more convenient for the community. This will maintain the neighbourhood policing option of face-to-face contact, which is important for residents in fear of crime.

Mrs Burt said, “I am grateful to Chief Superintendent Murray for listening when I put local residents’ concerns to him.

“Nevertheless it is clear there is still a reduced service and I will be petitioning the Police and Crime Commissioner to use his authority to save our local police desks.”

CH SUPT Murray said, “I am grateful to Lorely for representing the community’s concerns to me and although we can’t keep these front offices open I still want my officers to have face-to-face contact with residents of Solihull who have concerns.

“Neighbourhood surgeries which police officers or PCSOs attend still take place and in light of the imminent closures I will look at where we have these surgeries and how they are advertised.

“As ever I would encourage residents with concerns around crime or ASB to ring 101.”