Will it relieve pressure on overstretched 101 Phone Service?

West Midlands Police is trialling a new website that allows you to report crimes online. Using west-midlands.police.uk you can

Chief Constable Dave Thompson claimed the move had been driven by a "huge appetite from people for us to go digital."

Lib Dem Councillor Jo Fairburn said: "At a Council meeting earlier this year I questioned the level of service provided by the 101 non-emergency number.

“The Solihull Cabinet member for Stronger Communities seemed unaware of the problem - in spite of the region’s Police bosses acknowledging it.

"While welcoming this trial, I’ve called on the Chief Constable to properly resource the phone service.

“Many, including some older people, don't have internet access or don’t feel comfortable reporting crimes on a website."

We featured the Council's plans for an 18 month trial of part-time traffic restrictions, in the April edition of Olton Focus. 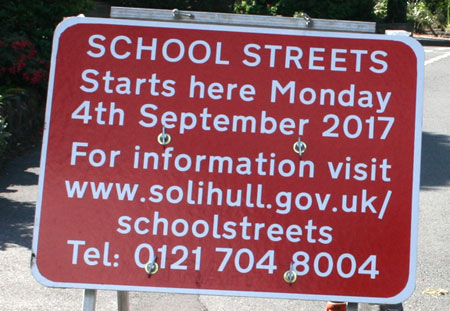 A number of residents living near to the school subsequently contacted us.

Some complained about the lack of official information, others about the fact the Council had gone ahead without consulting them.

The Council said they’d "engage with" residents and parents, by the end of April.

The Council missed their April deadline, and finally sent out letters and leaflets in July. The project hasn’t been planned well - a result of not discussing it with residents first.

Rules appear to have changed as residents asked the Council for more details.

What you told us in our survey

If you haven’t yet taken our short survey, and live near the school, you can still do so here. 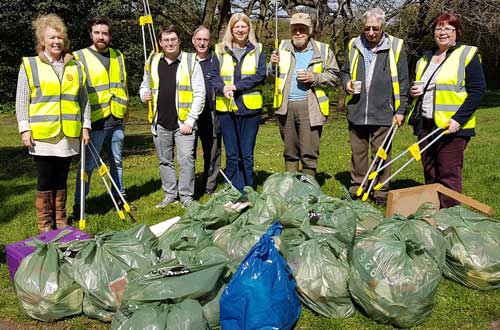 We collected 15 bags of rubbish and some small pieces of furniture!

The Literary Litter Pickers also continue their great work in the area around Olton library.

We saw a lot of litter in the shoppers car park when helping Chris Dunster’s team recently. We’re told this is left by taxi drivers parked there, waiting for their next job.

We call upon any drivers who are letting the side down to "take your litter home"!

MP should stop blaming Council & do more in Parliament

We say: Travellers should be able to live their lives according to tradition, but when the actions of one community negatively affect the lives of others there are clear limits. Give the Council more powers to deal with this now, Mr Knight. 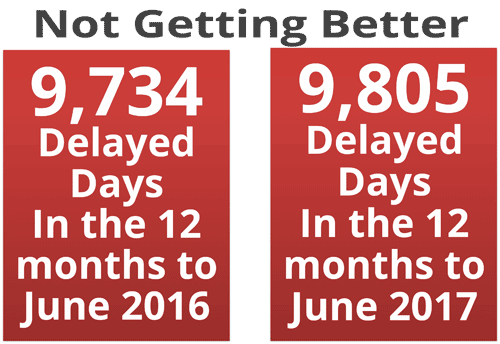 Now, Solihull's health funding group - which expects to be £5.5 million short this year - is hoping to merge with two Birmingham groups. Birmingham MPs aren’t happy at the thought of subsidising Solihull. We’re not happy with the level of Government funding for Health & Social Care!

Lastly there's the scandal of the local health and social care "Sustainability and Transformation Plan" (STP), which was supposed to be subjected to public scrutiny. There’s still no sign of that, despite the planned cost-saving changes.

National Express have re-routed the 58 bus, meaning it now stops at Olton Station, and is a little more frequent between Yardley & Solihull. We welcome a new service at the station, after the 37 bus was routed away from there last year.

Councillor Jo Fairburn met with bus bosses to discuss the move. She requested that, with Winter coming, they should install bus shelters at the new stops on Warwick Rd near the library.

This looks possible on the eastbound side (pictured), but there isn’t much room for a shelter next to St Margaret’s Church, where the pavement is narrow.

Congratulations to the St Bernard's Road Open Gardens Group, on raising money for the Stroke Association.

A total of 11 houses opened their gardens to visitors recently.

A new street association has been formed for residents of Mason's Way and Mason's Close. A BBQ was held earlier in the summer. Lib Dem Councillor Jo Fairburn is pictured with volunteers at the launch event.

We were asked by a resident why the Bickenhill Recycling plant closes so early each day (5pm, and 6.30pm only on Tuesdays).

Birmingham's recycling facilities stay open ‘til 9pm in Summer. The official response from Council officers was that, when it was open later in the past, it wasn't used very much after 5pm.

No Date for Nursery 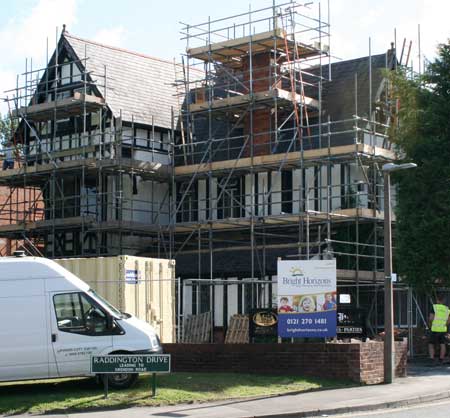 No firm date has been announced for the opening of Bright Horizons nursery, currently taking shape at the Old Tudor Court Hotel on Kineton Green Road.

It will cater for babies and children up to 5 years old, and promises to be a good addition to local childcare provision.
However, local residents are sceptical about promises that local roads won't be blocked by traffic as children are dropped off and collected.

We have written to the company asking if they can stagger children’s start-times to keep traffic to a trickle (with no floods!)