Reformed drug addict Jason Turner has received high praise for his film Making Your Past Pay, which stars Birmingham poet Benjamin Zephaniah and advises offenders how to find work after leaving prison. 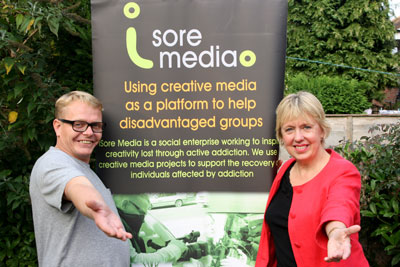 Jason’s local MP Lorely Burt, a former assistant prison governor, was so impressed she raised his film in the House of Commons with Andrew Selous, the Parliamentary Under-Secretary of State, who said that Mrs Burt was ‘rightly proud of her constituent’.

Jason beat 22 years of heroin addiction in 2008. Since then he has founded social enterprise i-Sore Media to make rehabilitation films, graduated with first class honours from Birmingham City University and married his partner Liz. They live in Damson Wood and are expecting a baby.

Mrs Burt, who visited Jason at home to wish him and his family well, said, “Jason has an amazing story which goes to show it’s never too late to turn your life around.

“As a former assistant prison governor I know giving offenders the right support is vital, not just to give them a second chance but to cut crime so everyone benefits. Having been through the system himself Jason is in a perfect position to help others.

“Making Your Past Pay is a highly professional film which I’m sure will make a big difference. It was a pleasure to meet Jason and discuss it with him.”

Paul Levy is Head of Interventions for Staffordshire & West Midlands Community Rehabilitation Company. He commissioned i-Sore Media to make the film Making Your Past Pay.

Paul said, “The film is an excellent tool that can help people to think about disclosing convictions. I am delighted that such an inspirational figure as Jason is working with us to help turn lives around.”