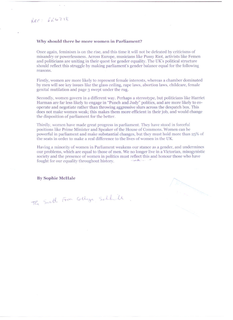 The day will include watching a debate in the House of Commons, a tour of 10 Downing Street, and meeting MPs and women entrepreneurs in the Speaker's Apartment.

The 'Inspiring Change' event is run by the All-Party Parliamentary Group for Women in Parliament, of which Mrs Burt is a member, to support International Women's Day, which falls on 8th March. MPs can invite one person to take part each.

Mrs Burt decided to run the competition - inviting girls in local sixth forms to submit 200-word essays on 'Why we need more women in Parliament' - as a way of choosing someone to take part. 18-year old Sophie of the Sixth Form College, Solihull, won first prize. However, Mrs Burt has promised something special for runners up as well.

Mrs Burt said, "There were many excellent entries and I was encouraged by the strength of feeling about getting women better represented in politics.

"I was particularly impressed by the knowledge Sophie showed and her excellent writing style.

"Women's talents are under-utilised in top decision-making roles all over the country, and I hope that Sophie will feel inspired to make the most of her talents in whatever career she decides to apply them to.

Sophie McHale said, "I was delighted to have won this competition.

"Women must have greater representation in the political world as the issues that affect women matter.

"Therefore to be part of a Parliamentary event dedicated to this very cause is an honour, and I would like to thank Lorely Burt for this great opportunity."