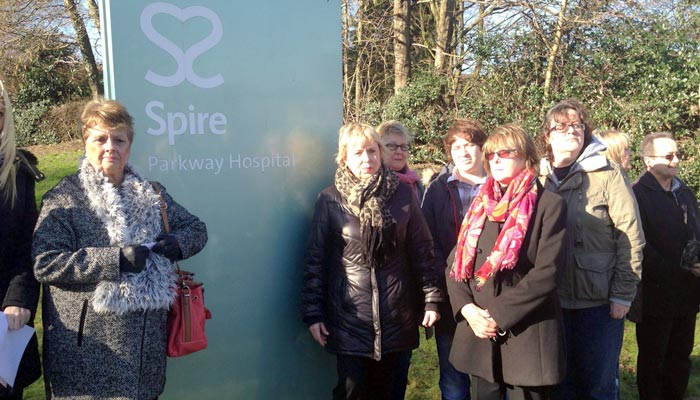 The protest, on March 3rd, was held to voice anger at Spire Healthcare’s delay in paying compensation.

The women who were given unnecessary or guideline-breaching breast surgeries by Mr Paterson have launched legal cases against Spire Healthcare who have – in the words of the patients themselves – “continuously dragged their feet, made empty promises and utterly let us down.”

Mr Ian Paterson practiced as a cancer surgeon at hospitals owned by the Heart of England NHS Trust and Spire Healthcare in the Midlands. When evidence of Mr Paterson’s malpractice as a breast surgeon was first discovered, the NHS carried out a full independent investigation and published a report. The Trust is currently progressing compensation claims and have already begun making payments to affected women treated by Mr Paterson on the NHS.

By contrast, private healthcare provider Spire delayed setting up an enquiry and their report was produced four months after that of the NHS. Spire has since delayed making payments to the women affected by Mr Paterson’s negligent treatment and failed to meet any of the agreed deadlines to progress the cases with the patients’ solicitors, Thompsons.

“The frustration of Ian Paterson's victims has now boiled over, resulting in the demonstration today.  They have been waiting for justice for years, and I understand some of them have died waiting.

“This inordinate delay cannot be allowed to continue. Spire Healthcare should follow the example of the NHS by trying to find out what went wrong and acting much more quickly to compensate those affected.

“I have written to Spire to ask the reasons behind the continuous delays in this case and to provide me with a timeframe for the completion of the litigation process or provide a date for alternative dispute resolution.

Debbie Douglas, from Birmingham, underwent surgery with Mr Paterson at Spire Parkway in 2003, only to be later told that the ‘cleavage sparing’ technique he used was against guidelines, and could actually increase the risk of her breast cancer returning. She said:

“We are here protesting to show how angry we are at Spire - it’s been three years with no change in the status of the legal case. I have become close with a number of other affected patients and it’s devastating to watch some of my friends’ breast cancers return because of the treatment he gave them.”

“Spire has made countless empty promises to us, but they have let us down time after time. We think we deserve better and we’re protesting here at Spire today to tell them that we will not be ignored.”

“Spire have made no effort to help us. When receiving medical care you expect to be protected from harm, not exposed to it. What is even more outrageous is that Spire’s Chief Executive is set to receive a £9m bonus whilst ignoring people like us who are suffering.”

“It is extremely disappointing that claims against Spire for their role in Mr Paterson’s negligence have been delayed. He was a surgeon who consistently and knowingly put his patients in danger and the unacceptable and wholly avoidable delay in the claims process has caused distress to his victims.”

“Spire need to stop finding reasons for delaying payment. They were quick enough to take the patients’ money and they should be as quick to pay out when something goes wrong.”