Solihull Liberal Democrat MP Lorely Burt has welcomed a commitment by NHS bosses to maintain dementia services at Solihull Hospital’s Ward 10 until an improved service is up and running. 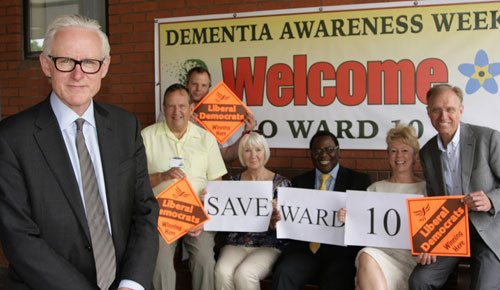 Dr Anand Chitnis and Dr Patrick Brooke, the senior doctors at Solihull Clinical Commissioning Group, made the commitment to Mrs Burt and Lib Dem councillor Martin Hewings after they presented a 2,566-signature petition calling for dementia services to be protected. Cllr Hewings is the local Lib Dem health spokesman.

Mrs Burt has been campaigning since March after learning of plans to close Ward 10, which offers specialised care for dementia sufferers who enter Solihull Hospital with other acute health problems. The average patient age at Solihull Hospital is 82.

Instead the Clinical Commissioning Group now plans to offer an improved dementia service. Senior doctors have promised that this will be up and running by the end of October, and that Ward 10 will remain open long enough for all its patients to be transferred over.

Heart of England Foundation Trust has committed to training all ward staff across the hospital in working with dementia patients.

Mrs Burt said, “I am very pleased to receive this commitment from the Clinical Commissioning Group and I hope that local dementia sufferers and their families will feel reassured that their vital service will continue.

“This is a big victory for local campaigners and an even bigger one for vulnerable elderly residents.

“Obviously the plans still have to be implemented and details will need to be thrashed out. I look forward to seeing a full timetable for patients to be transferred as well as how the new service will be funded in the medium to long-term.”

Pictured: Norman Lamb, Liberal Democrat Minister of State at the Department of Health, with campaigners at Ward 10.