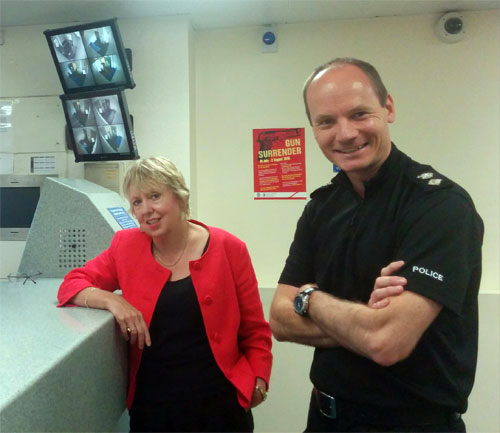 A group of about 25 caravans had moved into the park on Thursday 11th September having been evicted from Chadwick End. However, they left on Friday 12th after police officers obtained a Section 61 Order empowering them to remove the travellers from the site.

Over the next few hours the travellers packed up and left without resistance so the Section 61 Order was not exercised and no force was used.

Police Chief Superintendent Alex Murray said, “We worked closely with local council officers to ensure the encampment at Tudor Grange Park didn’t become a long-term problem for Solihull and we were able to take a strong line because of previous damage at Chadwick End.

“I am very pleased it wasn’t necessary to use more valuable police and local authority resources to require the travellers to move on.”

Mrs Burt said, “Working with council officers the police acted swiftly and nipped the problem in the bud with a Section 61 Order.

“It's not common to be able to obtain these, but I understand it was made possible because the travellers had trashed their previous illegal site at Chadwick End and stolen chickens from the local area.

“The police showed up in force and brought tow trucks just in case. Luckily the travellers gave up without a fight and were escorted out of Solihull by the police – last seen travelling south down the M40.

“I'd like to commend council officers and our new police chief Alex Murray for this fast, decisive action in averting a potential disaster in Tudor Grange Park.”