Solihull Liberal Democrat MP Lorely Burt has welcomed a 'partial U-turn' by the council over plans to mothball 45% of Shirley Library's books. 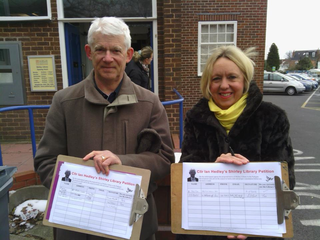 The council came under pressure last year from local residents including Councillor Ian Hedley and MP Lorely Burt, after sparking outrage with its 45% book-busting bombshell. However, the council has now revised down to 14% the number of books set to disappear from library shelves.

Liberal Democrat campaigners welcomed this partial U-turn by the council.

"However, none of this changes the fact that they are wasting £150,000 of local taxpayers' money on a move that library users do not want. While welcome, this partial change of plan is too little, too late."

Councillor Hedley said, "Conservative councillors have let down Shirley Library users. Now they are trying to spin the fact they are taking away fewer books than previously planned as evidence of their plan's success.