Liberal Democrats in Solihull have taken to the streets to launch their campaign to elect Ade Adeyemo as MP of Solihull on the 8th of June. 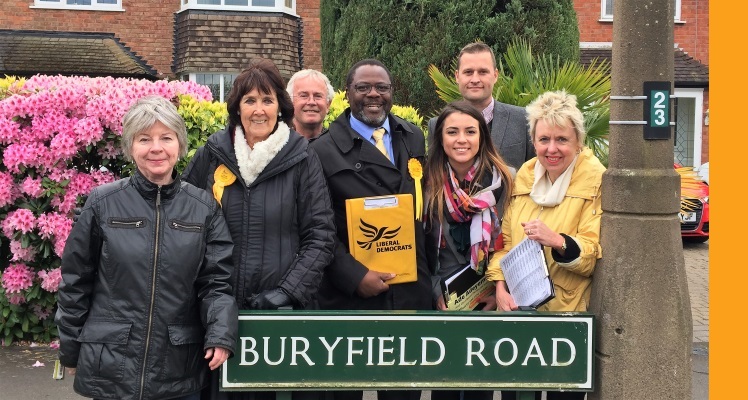 The snap election gives the people of Solihull a chance to elect an MP who will be a good leader and a great listener at a crucial time for the town.

Solihull schools are in crisis and will lose more than £11m of funding by 2019 (source: www.schoolcuts.org.uk). Cuts to the NHS and social care place a question mark over the range of services that will continue to be available at Solihull Hospital and throughout the town. Communities are suffering from the fall out of the EU referendum, and are crying out for somebody to listen to them, and heal their wounds.

Already a popular councillor in Lyndon ward, and for over 20 years a Solihull resident, Ade commented: “Most people in Solihull are dismayed at the current Solihull MP’s repeated support for Conservative government measures that will harm local businesses, and just as important, the poorest and most vulnerable people in our society.”

The #LibDemFightBack is as strong in Solihull as in other parts of the country, and membership of the local party is higher than ever. The message of the local elections around the country is that if you are unhappy with the direction of our country, then you must take this opportunity to vote in an MP who will be a real opposition to the government and not just a cheerleader for austerity and division.

The message on the doorstep is of determination to protect our children, teachers, doctors, and nurses; to look after those who are facing difficult times; and to rebuild confidence amongst the different communities of Solihull.

Ade Adeyemo is the Liberal Democrats’ Parliamentary Spokesperson for Solihull, and Councillor for Lyndon Ward.

Liberal Democrats in Solihull and Meriden have a long record of action for the community, fighting hard for local residents on issues that are important to them.