Eight-year old Chloe from Coppice Junior School has designed a flag to represent Solihull in a national project run by Parliament. 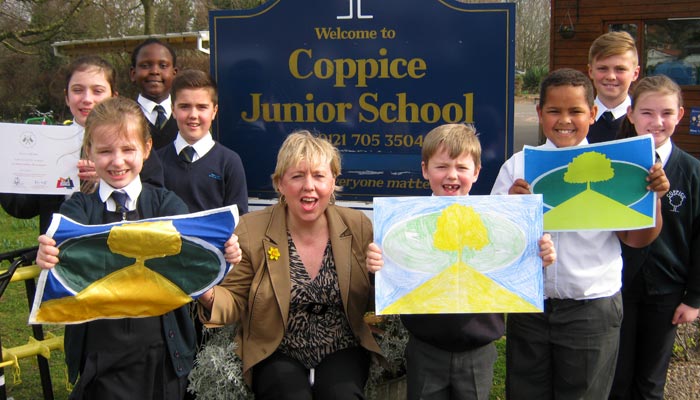 Coppice Junior School is one of 650 schools across the UK selected to submit flag designs for their respective constituencies. Coppice chose Chloe’s design after holding a competition among pupils.

To mark the 750th anniversary of the Simon de Montfort Parliament, Parliament selected a primary school in every constituency to create a flag that represents their area or community. This project forms part of Parliament’s 2015 ‘Parliament in the Making’ programme.’

Carole Vasey, who has been co-ordinating the school end of the project said,

“We chose eight gifted and talented children, two from each year group, to participate in this exciting project.

“The children researched our constituency and worked hard to produce their individual flags.”

“I chose yellow for the hill and tree. Elmdon stands for hill of Elms. That is why I put a tree on the hill.

“The yellow represents the sunshine. I chose green for the Land Rover because lots of people work there.

“I chose blue because it is a happy colour and Solihull is a happy place to live.”

“We were very pleased to be chosen from all the Primary Schools in the constituency to take part in such an important initiative. Our pupils are proud of their locality and this was an excellent opportunity for them to display this publically.”

“The 2015 Flag Project has demonstrated not just the wonderful creativity and imagination of all the participants, but also a genuinely unique child’s-eye view of the entire UK and it’s variety of local identities.

“The project has also offered a creative way to connect young people to the special 2015 de Montfort anniversary year, celebrating 750 years of the House of Commons and the local representation we know today.”

“It was a pleasure meeting Chloe and seeing the beautiful flag she designed.

“She has shown impressive knowledge and interest in her area and applied it to her design. Perhaps a career as a local politician awaits her one day!

“It is always a pleasure visiting Coppice Junior School, which gives local kids a good start in life by encouraging them to push themselves, for example by entering competitions such as this.”