Solihull Liberal Democrat MP Lorely Burt has gone one further than Guy Fawkes and set off an explosion in the Houses of Parliament. 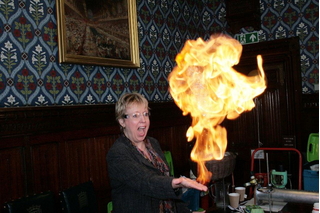 Mrs Burt met the first scientist ever allowed to carry out explosive chemistry experiments in the House of Commons at an event held by the Royal Society of Chemistry in Parliament on Wednesday 30th April.

Mrs Burt took part in some loud and colourful chemistry experiments performed by TV scientist Dr Hal Sosabowski from the University of Brighton.

Mrs Burt witnessed the whizzes and bangs of chemistry first-hand as Dr Sosabowski showed off the science behind glow sticks, a liquid nitrogen shower and a flaming methane mamba of soap bubbles.

They also discussed the importance of science to the UK economy.

Mrs Burt MP said, "The chemistry demonstrations were very impressive - lots of different colours, flames and clouds of liquid nitrogen. It was really interesting to hear about how science can help our economic recovery and create jobs.

"I hope that through displays like this, the Royal Society of Chemistry will encourage more young people to study science, especially girls, who are still under-represented."

The Royal Society of Chemistry's President, Professor Lesley Yellowlees, said, "Britain is a world leader in science. The chemical sector alone sustains 500,000 jobs across the country. But over the last decades public investment in scientific research has fallen behind our international competitors.

"We want to see a commitment from all sides of the debate to increase total government investment in research in the long-term to set Britain back on the path to science-fuelled growth."