The Covid-19 pandemic has shown us how badly the current system fails the most vulnerable in our society.

This is why Liberal Democrats have voted overwhelmingly to endorse a Universal Basic Income as party policy at the Liberal Democrat conference. UBI would provide a guaranteed income to our carers, zero-hour contract workers, the self-employed, and many more who have fallen through the cracks in recent months.

Solihull and Meriden's Councillor Laura McCarthy was one of the few selected to speak on the motion. 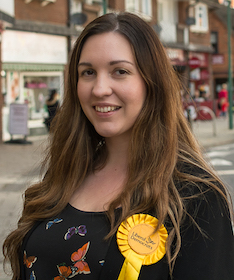 Read her speech below here:

"Conference, I want you to imagine that you are at the supermarket. You have one small basket of food. It’s not enough, but it has to be because thats all you can afford. You’re counting out your cash and you realise that you’re 13p short. You feel the eyes of the queue on you as you try to decide what you should put back.

This is the reality of too many people in our country today and it will be for so many more in the coming months. Six years ago it was my reality too.

At my lowest, I had to phone my grandmother for a £50 loan so that I could feed my child.

Nobody should be in that situation.

Universal Basic Income would give so many people a second chance and help them escape the poverty trap. It would improve the mental and physical health of those who have been living with the long term stress of poverty, and offer an opportunity to start small businesses or go back into eduction to go after a dream job.

It would end the long, inhumane wait for Universal Credit.

UBI would give our amazing carers an income and provide security for those on zero hour contracts. Universal Basic Income could change lives.

It could also change our society in other ways. So many people tell me that they want to get more involved in their community but can’t because of the money or because of work commitments. Universal Basic Income would change that by allowing more people to go part time if they wanted to and provide a better work/life balance. Conference, think of the potential Focus deliverers.

I firmly believe that Universal Basic Income is the right way forward for our country. Conference, vote yes and potentially change the lives of so many people.

Read the full text of the motion here: