Lorely Backs Shocking Appeal to Save Lives in Solihull

Lorely Burt has backed a fund-raising appeal by local charity FastAid to raise £35,000 for new defibrillators. 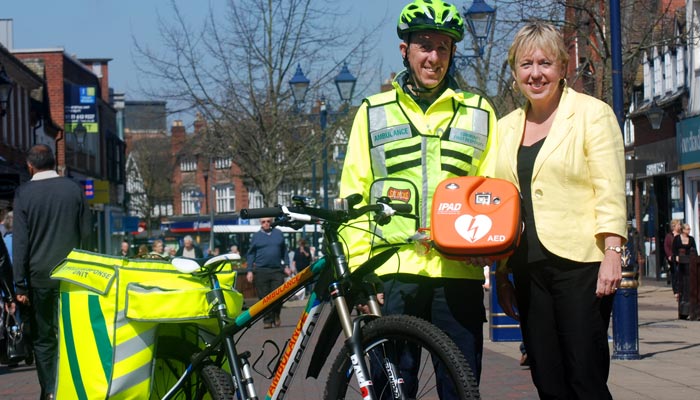 Dave Monk, a trustee, says that every 30 seconds that passes after a cardiac arrest reduces the chances of survival by 10%.

It has recently acquired a fleet of bicycles after receiving a grant from Jaguar Land Rover.

The charity has now launched its ‘Shocking Appeal’ to raise £35,000 to replace its ageing defibrillators. Each defibrillator will be used dozens of times and is expected to save the lives of several people living in Solihull.

“Fastaid is entering its tenth year and I’ve been lucky to be involved for most of that time.

“We’re a truly local charity – residents can actually see us cycling or driving on their streets using equipment paid for with their donations.

“I would urge local people to give as generously as they can – they could be saving the life of someone who lives on their own street.”

“Fastaid do amazing work – volunteers who literally save local people’s lives in their spare time.

“People like Dave are the real local heroes on our streets and they deserve our support. I would encourage residents to give as generously as they can to their ‘Shocking Appeal’.”

You can donate to their Shocking Appeal fund-raising campaign here.