Liberal Democrat Care Minister Norman Lamb has told Samaritans volunteers of his ‘mission’ to put mental health on a par with physical health, during a visit to their centre in Solihull.

The Minister spoke passionately of how mental health had affected his own family. He described his work introducing waiting-times targets for mental health treatment and outlined Lib Dem proposals to raise mental healthcare funding by £3.5 billion over the next Parliament.

Samaritans volunteers quizzed Mr Lamb about his views on mental health and discussed their own experiences helping distressed people in Solihull.

“It was a privilege for me to meet the hard-working Samaritans volunteers who literally save people’s lives in Solihull.

“Equal treatment for mental and physical healthcare has been my personal mission as a Minister and I know Lorely is passionate about this too because she raised this herself in Parliament. I was delighted when her campaign for more local mental health beds succeeded.

“We need to end the stigma and discrimination that have held back mental healthcare. The Liberal Democrats would commit £3.5 billion more funding to mental health in the next Parliament, improve access to talking therapies and work to keep vulnerable people who are unwell out of police cells.

“This is a top priority for us and it’s on the front page of our manifesto.” 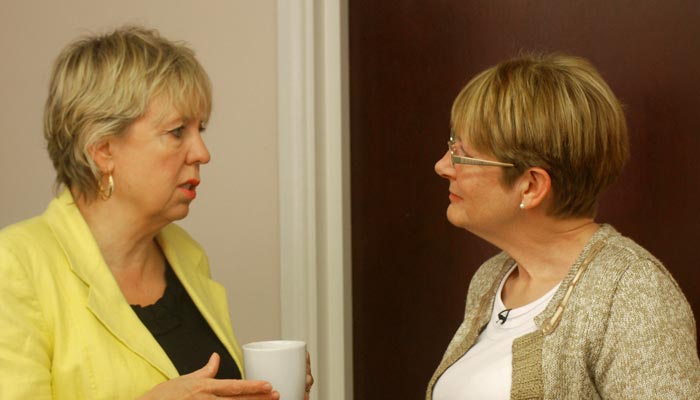 “It was great to introduce Norman and Lorely to our volunteers.

“On average, we respond to one call every ten minutes at our branch alone. Our callers, who are usually in distress or despair, value the opportunity to talk to our team of volunteers about how they are feeling and the problems they are struggling with - and it is a privilege for us to listen to them.

“As a charity, we are dependent on our fantastic volunteers, and contributions from businesses and individuals, to make sure we can continue to offer this important service.”

“The recent rise in male suicides shows that the Samaritans are needed more than ever. At the same time, so is more investment in mental healthcare.

“I am very proud that the Lib Dems are the first party to commit to giving equal esteem to physical and mental healthcare and we have a costed plan to do it.

“In any given year one person in four will suffer mental health problems. The Samaritans help all kinds of people with different problems.

“I hope the new mental health beds which have been promised by the Mental Health Trust will go some way to alleviating the burden.”

Lib Dems will increase mental health spending in the English NHS by £500m a year – half of which we delivered in this year’s budget – and provide the cash for similar investments in Scotland, Wales and Northern Ireland. They will:

Why it is necessary

Mental health represents nearly a quarter of ill health in our country (23%) but only £1 in every £9 the NHS spends is on specialist mental health services. Better care for mental health is a key factor in building a stronger economy and a fairer society. The moral and the economic case for change is overwhelming.