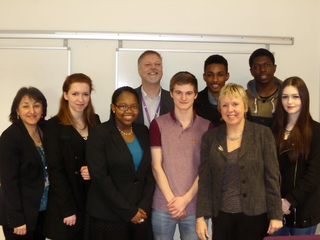 Under the current funding formula, 16-19 education providers receive £1,000 a year less per student than pre-16 providers.

Sixth form colleges lose out even more because, unlike schools and academies, they cannot claim back VAT, insurance costs, or business rates.

Students at the Sixth Form College, Solihull, met Mrs Burt and agreed with her to jointly petition Education Secretary Michael Gove for a review of the funding formula for 16-19 education providers.

Mrs Burt said, "The government has had to make some very tough spending decisions to get borrowing under control after the mess left by the previous government.

"However, it seems to me that sixth form colleges are getting a particularly tough side of the deal.

"I'm calling on the Education Secretary to review this anomaly.

"Given how crucial a stage it is, students wish to run a joint petition in the hope that the Education Secretary reviews this proportional dissimilarity within the system, and the formula under which 16-19 education providers receive less funding."

Paul Ashdown, Principal, the Sixth Form College, said, "Sixth Form Colleges like us have a national reputation for delivering an excellent education, but we now have less funding to do this with than any other part of the education system.

"We are delighted to have the support of our MP in requesting that this discrepancy is reviewed. We do not understand why sixth formers deserve less resource than students at other stages of their educational journey.

"Why are they valued less?"

We, the students of the Sixth Form College, Solihull, call upon the Secretary of State for Education to review the discrepancy in funding for sixteen to nineteen-year olds' education compared with the levels of funding provided at other stages in their academic careers.