Solihull MP Lorely Burt was only too pleased to oblige when she was invited to go ‘OT’ in support of a new local business. 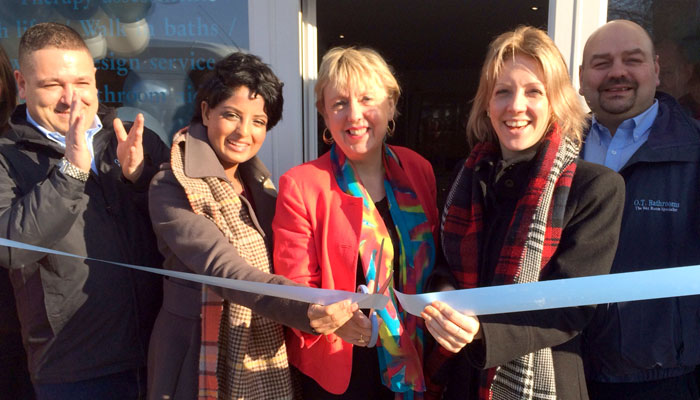 In this case OT stands for 'Occupational Therapy', and she was guest of honour at the official opening of OT Bathrooms, in Warwick Road, Olton Hollow, who are suppliers of specialist bathroom equipment.

The company is the brainchild of local businessmen Steve Holmes and Richard Da Silva, who first had the idea of launching such a business following the death of his father four years ago.

“Steve worked for housing associations, and he felt the same way as I did – which is why, setting up, we have established a great working relationship with independent occupation therapists, because our two services go hand in hand.”

Occupational therapy specialists ‘Promoting Independence’, one of the biggest organisation of its kind in the UK, has been supporting Richard and Steve ahead of their launch, and will be working with them going forward.

“We’re really pleased to be working with OT Bathrooms, and are very impressed with Richard and Steve,” said Promoting Independence director Stuart Barrow. “Our role is to make sure people get the best possible advice should they need a specialist bathroom, and then OT Bathrooms will do the rest. We believe the customer receives a complete service, relevant to their requirements.”

Mrs Burt said she was delighted to be invited to cut the ribbon and declare open “an important and exciting” new Solihull enterprise.

She said, “It’s great to see new businesses open locally, especially one such as this, which fulfils an important need to members of the community, working with occupation therapists to provide the right service at the right price – and everything they provide is manufactured here in the UK!”