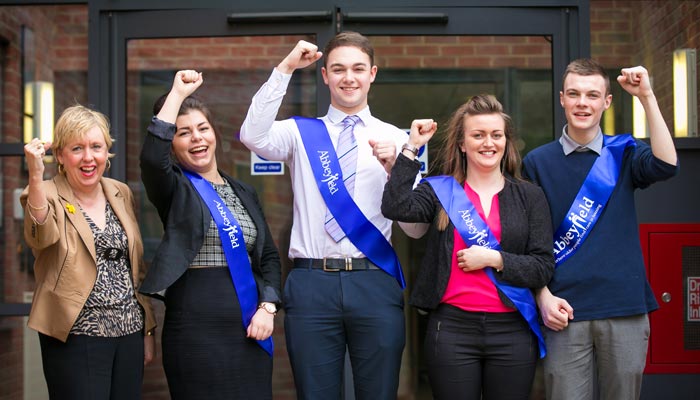 The event saw Abbeyfield apprentices from across the country come together to celebrate the scheme during a day of interactive learning experiences at the charity’s Hampton House, where Mrs Burt spoke in support of the Apprentice Scheme.

For 19-year-old Reese Milligan from Solihull, an apprenticeship with Abbeyfield paved the way for him to make real the knowledge he had learnt at school and Sixth Form College.

“After I finished my A Level exams, I wanted to put into practice all I had learnt from my education into a business environment, which was why I looked at an apprenticeship instead of going to university.”

For Reece, no two days are the same in his apprenticeship at Abbeyfield’s Hampton House. It’s a modern development where older people enjoy living in their own apartment, yet have the reassurance of 24 hour on-site support from a team of professionals, while remaining involved with life in the local community.  Reece said,

“I really enjoy my job. I’m pulling what I have learnt during my education into a paid job and I’m continuing to learn new skills along the way.

“I do a real variety of business administration tasks to support the managers here at Hampton House, like arranging travel and accommodation requirements and the necessary documentation to being the first point of contact for residents when they come home and for all visitors entering Hampton House.”

And not only is Reece developing his business skills, he is enjoying the interaction with Abbeyfield’s residents, who are at the heart of all Abbeyfield does.

“I’ve built up friendships with residents as well as the staff here,” said Reece. “I really enjoy that aspect of the job, which is about making time to say hello and have a chat with older people. I’ve learnt a lot about Abbeyfield’s ethos and its work to make the lives of older people happier.”

“Apprenticeships are a great way to get young people earning and learning whether as an alternative to university or something to do before going to university.

“By massively increasing government support, Business Secretary Vince Cable has doubled the number of apprenticeships and in the last four years we have seen over 7,000 created in Solihull alone.

“It is inspiring for me to see a hard-working young person like Reece Milligan taking up an apprenticeship at Abbeyfield, giving himself a better chance to get on in life.”

“Abbeyfield is proud to be celebrating the positive impact apprenticeships have on individuals within our organisation and it is important the skills of these talented and committed young people – the real apprentices - are recognised.

“As a charity whose ethos is to make a difference to the lives of our older generations, it is only right that Abbeyfield should nurture and support young people too, and help them develop the skills sets they need to progress in their chosen career, as well as building a trained future workforce for our organisation.

“Abbeyfield will be expanding the number of apprentices offered as we continue to create opportunities to support young people into work.”

Abbeyfield’s Apprentice Celebration Event was part of the eighth annual National Apprenticeship Week which took place from 9-13 March 2015, with hundreds of events taking place across England.

The Week, co-ordinated by the National Apprenticeship Service, was designed to celebrate Apprenticeships and the positive impact they have on individuals, businesses and the economy.

For more information about apprenticeships with The Abbeyfield Society go to www.abbeyfield.com