Solihull Liberal Democrat MP Lorely Burt has met with Norman Lamb, the Government Minister with responsibility for dementia sufferers, to discuss the threatened future of dementia services in Solihull. 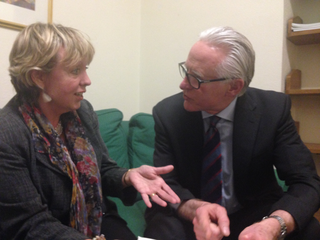 Ward 10 provides care in a safe environment for dementia sufferers until they are ready to return home. It is under threat as Solihull Hospital looks at ways to cut costs. However, following Mrs Burt's online and door-to-door petition, local NHS bosses have agreed to fund Ward 10 for another three months, after which a final decision will be taken on its future.

After meeting Mrs Burt in the House of Commons, Mr Lamb said he 'applauded' her campaign and promised to look into the issue.

Mrs Burt said, "I am delighted that Norman Lamb is now looking into this. As the minister responsible for dementia services, nobody is in a better position to do so than he is.

"Dementia sufferers and their families in Solihull are really dependent on Ward 10. When I recently visited Ward 10 I saw the fantastic work the staff do there.

"I very much hope that this will help us keep up the momentum, so that dementia sufferers continue to have a first-class service they can rely on."

Mr Lamb said, "Dementia is one of the greatest public health challenges we will face over the coming decades across the world. We must provide the best dementia care whether at home or in hospital."

You can sign Lorely's petition to save Ward 10 here http://www.ipetitions.com/petition/save-ward-10