Cllrs Laura McCarthy, Glenis Slater and local campaigner Brad Tucker have been hard at work helping residents with a number of issues around Elmdon including working with the council to re-dig the mounds at Elmdon Park after a car gained access with further bollards to be installed later, reporting glass and crockery in the soil next to the new path on Damson Parkway and working with the council to have the problem addressed, reporting fly tipping, alley ways which needed clearing, and overflowing bins, reporting severe damage to a tree and a telephone pole, working with Police on problem parking around the ward, and continuing to work hard trying to find a solution for Hillhampton Close and Cophams Close residents who are experiencing regular flooding of their properties in the rain.

Cllr Jo Fairburn and community campaigner Michael Carthew have been working very hard for Olton residents. After hearing that a concerning planning application had been submitted for consideration, Michael created a petition for residents to express their views and helped them with submitting objections to the council. Michael has also been busy litter picking and reporting over grown areas around the ward. 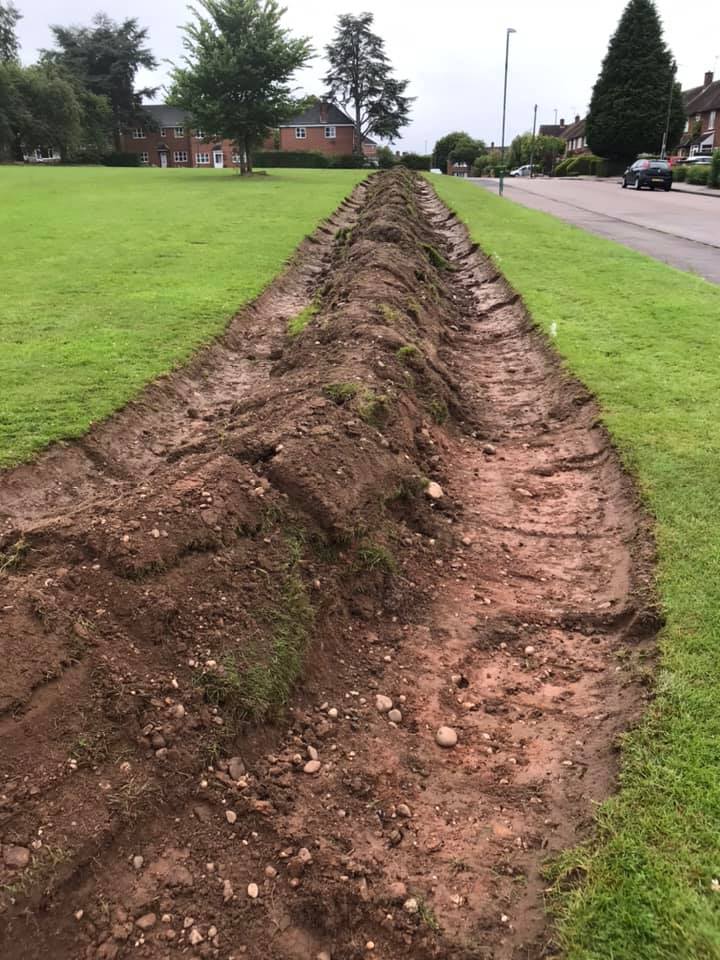 Cllrs Ade Adeyemo and Kathryn Thomas have been busy addressing a number of issues for residents this month. At the end of July there was an unauthorised encampment on Hobs Meadow. As soon as they were made aware Ade and Kathryn began working with council officers and Police. By early the next morning they had secured an agreement from council officers to assess the security of the site with a view to installing mounds. This was approved by Council Officers and the mounds were dug just days later. This will now be seeded with wildflower like Richmond Park. Councillors have also been working hard to progress the idea of the remembrance garden in Jubilee Park which was put forward by a 10 year old Lyndon resident. In addition to this Kathryn and Ade have been hard at work reporting flytipping, litter picking, and helping residents with personal issues. At July full council Ade presented a petition signed by residents of Campden Green for more parking.

Our Councillors work hard in council and sit on a number of different boards. This month our Councillors have scrutinised a wide variety of issues, including decisions on the new free school for children with autism in the borough, planning applications, the borough five year housing plan, Covid response and impact.

We also held our first full council since the beginning of Covid and lockdown. During this session our Councillors contributed on Black Lives Matter, questioned Cabinet Members on the rise of flytipping and enforcement action, and contributed to the debate on social housing to call for more building, faster. You can read more about this here: Lib Dems call for more social housing. During the debate Cllr Kathryn Thomas questioned whether it would be possible in the future to consider converting office space outside of the town centre that wasn't being used long term post Covid into warehousing in order to safeguard or attract new jobs to the borough. We were disappointed that Kathryn was mocked for this suggestion to protect borough jobs by Conservatives on social media.

In July Cllr Kathryn Thomas and Cllr Ade Adeyemo were involved in a "call in" procedure over the re-tendering of the bin contract. During the meeting Lib Dems, Greens, and Labour argued that a 10 year contract rather than the usual 7 years was concerning given the council's £18m financial black hole in the wake of Covid and bad value for council tax payers. After discussion about the issue, the decision was split down party lines with Opposition Councillors voting against the decision and Conservatives voting for. (5/4).  We will continue to fight for the best possible deal with Solihull residents.

We continue to work hard on issues for residents across the borough. Below are some local media articles we have been featured in during the month of July.