No crossing needed because ‘drivers will be more polite’ – council

Solihull Council has defended plans to remove a pedestrian crossing because it believes it can 'encourage a high level of courtesy from drivers towards pedestrians'. 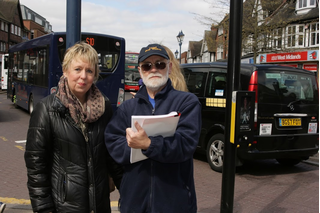 The council's claim comes in response to a letter from Solihull Liberal Democrat MP Lorely Burt calling on the council to preserve the crossing on Poplar Road as part of its plans for Solihull Gateway.

Mrs Burt jointly launched a petition to save the crossing with local charities including the Royal National Institute of Blind People. It is available online for signing here http://tinyurl.com/lypsp7n.

Mrs Burt said, "I am very disappointed with the council's dismissive response.

"It's clear once again that the council simply is not listening to local residents. With this attitude it could be only a matter of time before there is a serious accident.

"A trip to the shops for a blind or partially sighted person can be a challenge at the best of times. Without the Poplar Road crossing, I fear these vulnerable people will lose the confidence they need to make trips into the town centre and use the public transport there which they depend on.

"I want Solihull to be an inclusive place for everybody, including those living with disabilities. Unfortunately this response shows the council just doesn't get it."

Rebecca Swift, RNIB Regional Campaigns Officer, said, "The plans to remove this crossing are causing a great deal of concern for local blind and partially sighted people, who feel that their safety and independence will be threatened if this proposal goes ahead.

"If this crossing is removed, the bottom line is that they will have to walk out in to the road without knowing whether they have been seen and whether traffic has stopped. This is an extremely frightening and potentially dangerous position to be in.

"We urge the council to listen to the concerns of local blind and partially sighted people and to reconsider their plans to remove this crossing."

In its response to Mrs Burt's letter, the council claims that:

'The aim of the project is not to make life more difficult for any of our residents, particularly those who have a physical disability, but to help make this part of the town centre safer for all pedestrians. I do accept, however, that removing a push button crossing may appear at first to be contrary to pedestrian safety.

'If removing the crossing was the only outcome of the scheme it would cause problems. However, this is only one aspect of the project which includes a number of changes that will help to promote a low speed environment that will encourage a high level of courtesy from drivers towards pedestrians.'