I Hope You’ll Support Me in May

I'm planning to stand again in the local elections because there's still work to be done. It’s been a real privilege representing you and, being retired, I have the time to dedicate to this.

If you re-elect me in May I will continue to fight for more resources and better services - in particular:

NHS and Social Care - Fighting for more resources, and to retain important services at Solihull Hospital, at a time when the NHS is looking at the “disposal of surplus estate”

Housing - We must provide homes for young people in the Borough, at reasonable cost (there's not much space left in Olton)

The Environment - It was Lib Dems who introduced the 5p plastic bag charge (despite reluctance from the Conservatives who insisted on exemptions) reducing usage by 83%.

A little about John Windmill

John has lived in Solihull for 61 years, represented Olton for over 40 years, and enjoys helping residents with issues, big and small. He truly understand Olton and its needs, and he’s a member of the Olton Residents Association, the Olton Literary Litter Pickers and Olton's U3A.

The Conservatives have a big majority in Solihull, and the Lib Dems strive to keep the Tories honest. Labour only have one Councillor across the whole of the Borough, and can’t win in Olton.

Robbery - A Real Concern in Olton

Residents are telling us that crime is an increasingly serious concern for them, in Olton.

Neighbourhood policing relies on just a few officers and support officers to cover four wards including Olton. It's continually under threat because of pressures on Police budgets from the need to fight terrorism and cyber-crime.

Solihull’s Conservative MP recently wrote to a resident saying he was ‘delighted’ at the way Police spending has been protected. But because the Tory government is expecting the Police to do more, for less, it feels that the level of protection from crime is shrinking.

Solihull is One of the Worst Council Areas for Robbery

The latest comparison by the Local Government Association shows that Solihull was the sixth worst out of 36 Metropolitan Borough Councils in England for ‘robberies per thousand residents’.

Officers are working hard and doing their best, but the lack of funding means the local force continually moves officers on to the latest 'hot spot'. We need more police in Olton to act as a deterrent, and able to respond when we call. 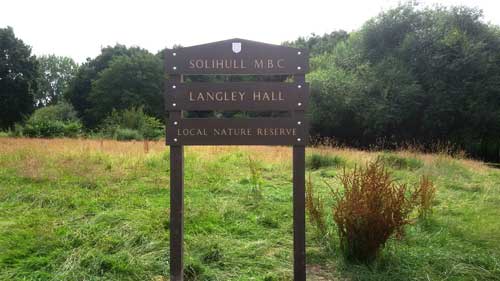 The Council is hoping to make the Swanswell Road entrance more welcoming soon, without compromising security, by installing a timber arch over the footpath.

This would be partially funded by the £2000 donation from Tesco and their Bags of Help scheme.

Last year the Birmingham & Solihull Midweek Conservation Volunteers did some work to increase plant diversity in the meadow areas. After cutting back the grass (right), they seeded the area with a native wildflower called yellow rattle. This slows the growth of grass, allowing  a greater diversity of wildflowers to grow in its place.

The volunteers also thinned some woodland in South Wood, and the Council is doing further thinning this year in the woodland and around the pond.

The park has already become a great resource for schoolchildren. Last summer the Council delivered a Nature Week to 350 local children at the Park.

Last year for three weeks, the Kineton Green Road crossing, near the Grange Road and St Bernard’s Road roundabout, was unmanned due to illness.

Solihull has five mobile wardens to cover such absences, but they were elsewhere covering in places of ‘greatest need’. During this time there was an accident on Kineton Green Road, fortunately not too serious.

John Windmill raised this at the December 5th Council meeting, and Tory Cabinet Member Ted Richards said “I currently have 11 vacancies which I can’t fill, for patrol officers”

We’re concerned that these vacancies haven’t been widely advertised, due to the Council’s long term desire to replace wardens with automatic crossings. So John asked the Council on January 8th for copies of recent adverts. By press time he hadn’t received any, but on the 18th the Council’s Stay Connected email to residents included the vacancies.

Winter illnesses and the shortage of NHS funding has been putting local services under intense pressure.

Bed occupancy rates reached 95% early in the New Year, in spite of the Heart Of England Trust having added extra beds for the winter. The recommended safe limit is 85%.

The Trust, which runs Solihull, Heartlands and Good Hope hospitals had 25 ambulance delays that exceeded an hour and 153 delays that were between 30 minutes and an hour.

The Solihull Observer quoted 'health bosses' saying the NHS in the Solihull area is "under sustained pressure".  On January 5th, the Trust didn't know how many operations and appointments would be delayed. As we went to print, they hadn't responded to our request for the numbers.

We say that the NHS and Social Care services need more money. It seems the Tories are finally being shamed into agreeing with us. We can't all afford private insurance!

Bus Services - Tell us what you think

Although we’re not responsible for local buses, we often discuss services with National Express and others, and we’re interested in your thoughts - to try to meet local needs.  Please fill in our short survey online.

Tell the Council what you think NOW.  The Council plans to review the school streets trial soon. We're now into the second term of this 18 month trial, in which non-residents are banned from the zone around Oak Cottage school at times. Parents and grandparents found it difficult in the snow and ice to walk safely with children for hundreds of yards with some, understandably, ignoring the restrictions.

If you have any comments, tell the Council before the end of February. Give your feedback by email - [email protected] 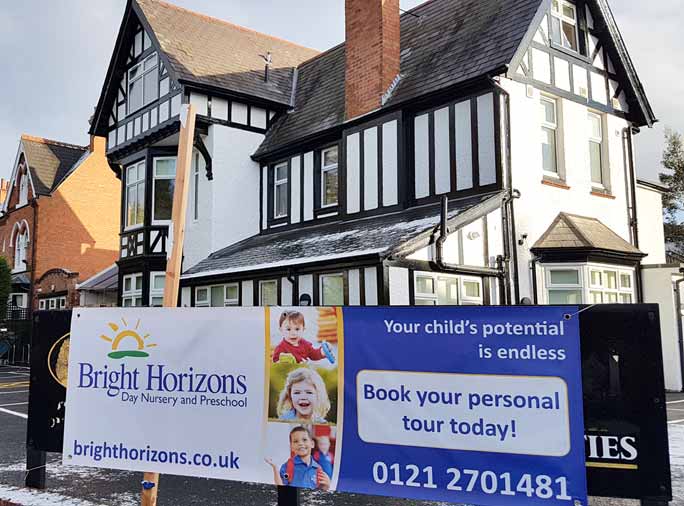 The new nursery, on Kineton Green Road, opened early in the New Year and they're now taking bookings. They tell us they participate in the government scheme for 30 hours of funded childcare for 3 & 4 year olds.

After I took residents' concerns to planning officers, Bright Horizons promised that there'd be no negative effect on local roads.

The nursery's planning approval relied on Bright Horizons enforcing their traffic management plan. If you live nearby please let us know how this works in practice.

Discussions continue with the authorities to install a bus shelter near the library, where a new bus stop was installed last year. After speaking to people waiting in the wind and rain, we believe this will be a welcome addition.

The owners of the Warwick Road pharmacy say they’ve been made very welcome since taking over last November. They’ve added a number of new services, and we thought you’d like to know what they can provide:

Free Delivery - Offered to everyone on weekdays (Saturdays in an emergency)

Blister Pack Service - Medication in Monitored Dosage Systems, to help you take the right medication at the right time

Disposal - Collecting out of date/unwanted medication

Medication Usage Reviews - A consultation with the pharmacist

If you'd like to help, here are the future dates (meet at 10.30 at the library and pick litter for just an hour): February 3rd, March 3rd (Part of the Great British Spring Clean), April 7th, May 12th, June 2nd and July 7th.