The eighteen-year old's action-packed day included watching a House of Commons debate, tours of 10 Downing Street and the House of Lords, and meeting other MPs and women entrepreneurs for tea in the Speaker's Apartment.

Sophie is studying Maths, Economics and Politics at the Sixth Form College, Solihull, and hopes to apply her talents to a degree at Manchester University.

"I had the chance to hear what real politicians had to say about the rights of women and new laws to achieve greater equality for women in the UK.

"After witnessing the strength of female MPs and entrepreneurs throughout the day, I am determined to share my newly found confidence with other young women and encourage the participation of women in politics.

"Thank you to Lorely Burt and her team for organising my visit, it has definitely inspired me to pursue a political career in the future." 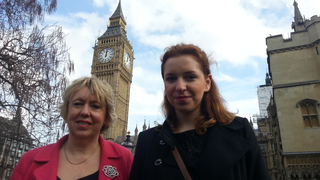 Mrs Burt said, "It was a pleasure meeting Sophie, a very bright young woman with a promising future. Although there were many excellent entries to my competition, her essay was exceptional.

"There are too few women in politics and I am doing my part to change that.

"Hopefully events like this will inspire more young women like Sophie to make the most of their potential as future leaders."