A film created by student Kerri Donohoe from Solihull was named as the 2014 winner of the Secondary: Film category in Parliament Education Service's national film competition,Lights, Camera, Parliament! 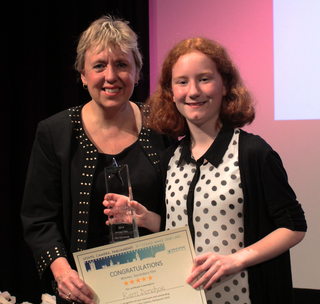 The competition asked students to make a three-minute film, script or storyboard explaining what law they would create, giving young people a creative platform to voice the issues of importance to them, whilst learning about Parliament's law-making process. Kerri Donohoe's contribution, A Rubbish Law, uses stop-motion animation and story-telling to argue for increased penalties for littering.

Kerri, who is currently in Year 9 at Tudor Grange Academy, said, "Lights, Camera, Parliament! gives young people a voice. A chance to get our opinions across, and to let the world know what we think. However, sometimes our honest opinions may not be entirely what adults would like to hear… I thoroughly enjoyed every aspect of creating my animation - from researching different laws to making the models. It's totally worth all of the brain power used when you see the final product."

Lorely Burt, Kerri's local MP, said, "I thought this was a thought-provoking and hugely entertaining film which got its message across by the use of animation. Kerri was also the only winner who entered by herself and not through a school. I think she is to be doubly congratulated for her inventiveness and initiative."

Parliament's Education Service invited all six winners to come to London to visit Parliament and to have their films screened at the British Film Institute.