Solihull Liberal Democrat MP Lorely Burt is calling on Green Lane & Sheldon Surgery to reconsider its decision to force 82-year old May Jones to find a new surgery after 33 years with the practice. 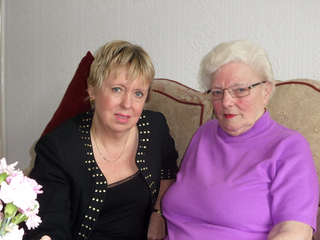 Mrs Jones was one of the first patients to register at the practice when it was set up.

Mrs Burt and Lib Dem councillor Martin Hewings have separately visited Mrs Jones in her home and Mrs Burt has written to the surgery asking them to let Mrs Jones stay. Practice bosses agreed to extend her registration to the end of May but insisted they would not extend it any further.

Mrs Burt said, "I think it's a heartless decision to ask May to leave, especially when, like May, she has been with a surgery for so long and never called a doctor out on her own account.

"I understand there's no hard and fast rule so I urge the surgery should use its discretion to let her stay."

Cllr Hewings said, "I was horrified to hear that after 33 years at the practice, they are now turning around and saying they don't want her as a patient anymore, particularly as she lives only seven minutes by car from the practice.

"This to me seems cruel and mean."

Mrs Jones said, "I can understand a surgery not wanting to take new patients from out of their area, but I have been at this surgery since the day it opened, over 30 years ago.

"I trust my doctor and don't want to have to build a new relationship with a new doctor at my age."