Along with a host of Midlands' employers and apprentices, Solihull College welcomed Deputy Prime Minister Nick Clegg and Business Secretary Rt Hon Dr Vince Cable to an apprenticeship event at the College's Blossomfield Campus on Thursday. 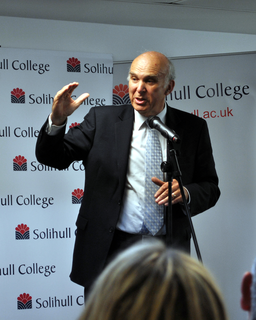 The Business Secretary explained how, through the government's investment, that apprenticeships will "give young people a vision of a good career through vocational education". Mr Cable said Further Education has a crucial role to play and that Solihull College was a "beacon" for apprenticeships.

The event, which was run in partnership with Solihull Chamber of Commerce, was held to dispel the myth that apprenticeships are only for manual type labour jobs. With the help of big business names such as Jaguar Land Rover, Morgan Motor Company and Virgin Media in attendance, the exhibition and range of speakers challenged the idea that choosing university is the best choice post-further education.

Business Secretary Vince Cable MP echoed this important shift in perception, commenting, "I think we are beginning to change the psychology so that people see apprenticeships as an attractive career comparable to academic education and the FE sector has an absolutely crucial role to play."

Lindsey Stewart, Acting Principal of Solihull College, said, "This event delivered the powerful punch we were looking for, to show as a College, our commitment to young people and the wide variety of apprenticeships we can offer. It was an absolute privilege to welcome both Deputy Prime Minister Nick Clegg and Vince Cable MP to the College and it was encouraging to hear the governments ongoing commitment to apprenticeships as choices for young people post-GCSEs continues to widen."

When asked by the College about how he viewed the importance of apprenticeships, he commented, "You don't need your nose in a book to learn things... apprenticeships are catching people's imagination more and more... and it is becoming an increasingly recognised way of completing this difficult journey from education into work."

Local MP Lorely Burt, who welcomed the government ministers to Solihull College, said, "Solihull College did a fantastic job last year working with me on my campaign to encourage local businesses to take on apprentices, designing bespoke training programmes.

"Apprenticeships are a fantastic way to get young people earning and learning.

"I'm very proud of Solihull College and its hard-working young apprentices who are investing in their futures."

Following the departure of Deputy Prime Minister Nick Clegg and Business Secretary Vince Cable delegates networked and met with young people who were invited in to discuss apprenticeships.