The Tories have a big majority on the council, and even have a majority (2 out of 3) in Olton.

Democracy suffers when one party is so dominant.

It’s time for a change!

In the local 2019 elections your candidate is Brad Tucker.

Solihull is the 10th worst out of 36 Metropolitan councils in England for the frequency of robberies. Brad will fight for more Police resources for community policing.

Brad says teachers are over-worked and under-funded. We say local schools should get a fairer slice of education funding.

Solihull could lead the way to a healthy low-carbon economy. The council has to dispose of millions of single-use plastics each year, and you foot the bill in Council Tax. We can't recycle our way out of the plastic crisis, so let's reduce our use.

Councils can play a part in fighting climate change. Brad wants wider encouragement in the use of public transport - not penalising drivers but by making buses and trains easier to use.

Solihull Hospital mustn't be run down in the name of regional efficiencies. We're pushing for better coordination between social services and the NHS to reduce bed blocking.

Brad will oppose short-sighted funding cuts to local organisations that help prevent illness and keep people out of hospital.
Prevention is better than cure! 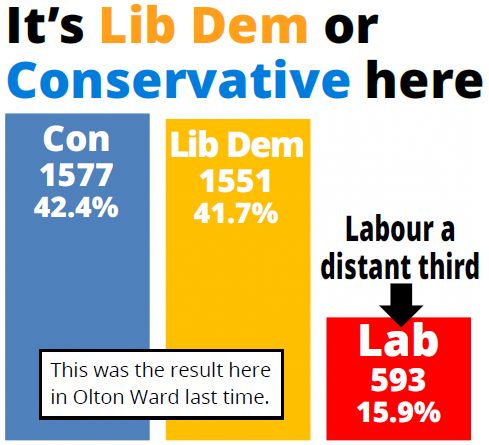 On May 2nd it’s a choice between the Conservatives and Liberal Democrats.

In the last Council elections we lost by just 26 votes. It’s that close!

A vote for Labour could let the Tories in

Published and promoted by Brad Tucker on behalf of himself and the Solihull & Meriden Liberal Democrats, all at 466 Warwick Road, Solihull, B91 1AG.