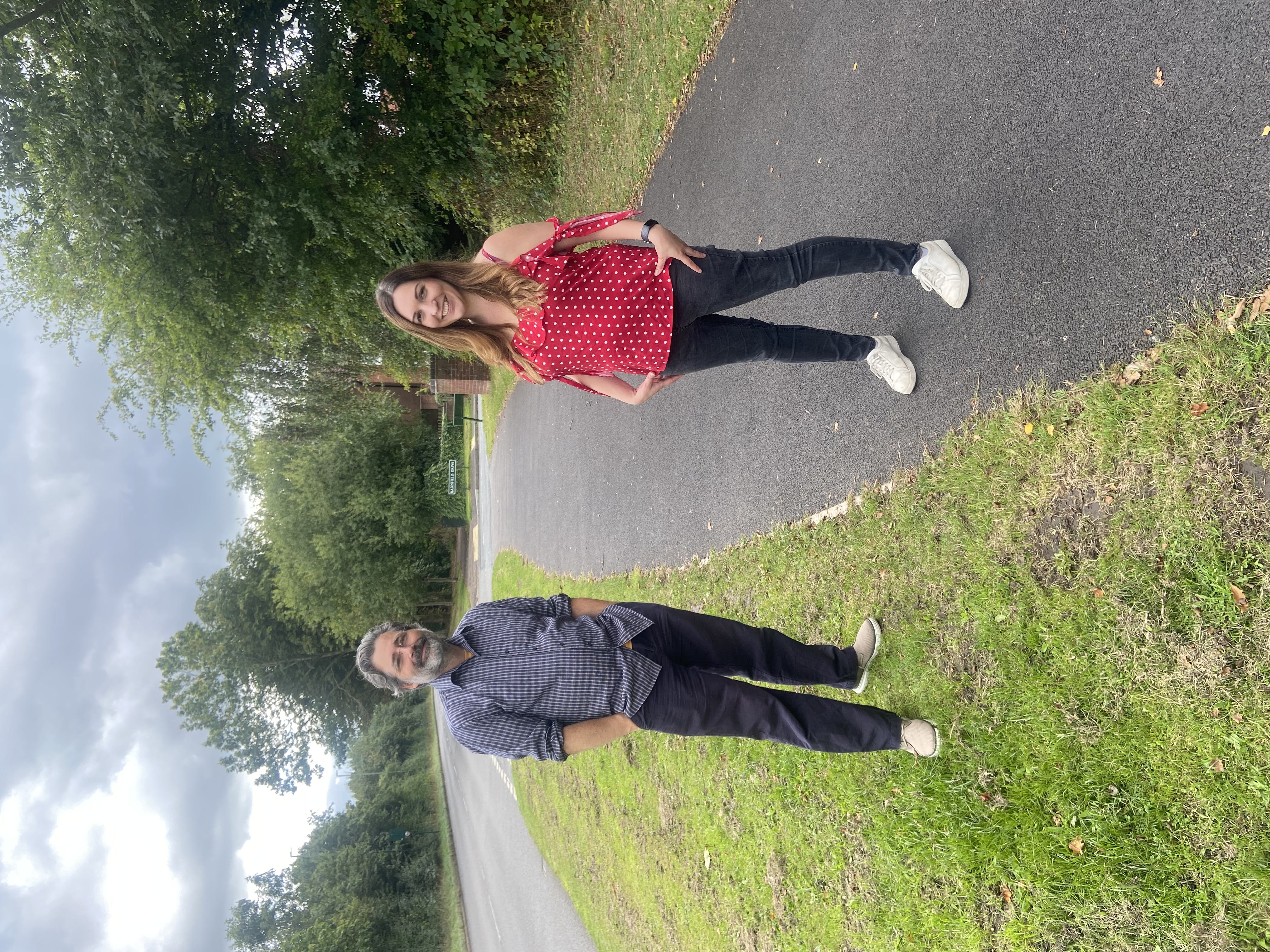 If you are an Elmdon resident in need of help for any reason then please do reach out to us. We will be happy to help in any way we can. We are also able to refer to food banks.

We are horrified by the Conservative proposals to move the Bickenhill Tip and Moat Lane Depot to Damson Parkway. Elmdon Councillors were not consulted or informed prior to this information being made public and we are horrified by the proposals, which will bring more traffic, fly tipping, and pollution to the area. At Full Council in December 2020 Cllr Laura McCarthy submitted a petition signed by 1,200 residents against the proposals and more continue to sign. The Conservatives committed in late April 2021 that the tip would no longer be relocated to Damson Parkway.

In January our petition for action on Valley Road and Rangoon Road was considered by the council. The Council agreed to spend £12,500 to look at a solution to the problem. They also agreed to raise the issue of the Wheatsheaf Junction problems with the West Midlands Combined Authority. Thank you to everyone who signed our petition!

We were disappointed to see the return of a planning application for an apartment block at the corner of Hobs Moat Road and Old Lode Lane, next to the Olton Tavern roundabout. Whilst we support new housing, this development was too big and would have made it difficult to use the roundabout safely, and had insufficient parking which would have led to dangerous on street parking next to a busy roundabout. Planners agreed and the application was rejected in 2021.

Following a number of incidents in Elmdon Park and Damson Lane Park we have launched a petition for CCTV cameras to be installed in each. We believe this will help reassure the community, discourage anti-social behaviour, and help the police evidence gather in the case of incidents. Our petition was successful and CCTV has been installed in Elmdon and Damson Lane Parks.

Valley Road and Rangoon Road are quiet residential roads, but over the years have become a notorious rat run as people try to avoid the Wheatsheaf junction and Coventry Road. These roads were not built to sustain this level of traffic, which includes HGVs.

We are asking residents to sign our petition to the council here: http://www.solihull-libdems.org.uk/valleyrangoon

Elmdon Ward has been represented by Liberal Democrat Councillors since 2004, when Barbara Harber was elected in that year's all-up elections.

Currently, the ward has two Liberal Democrat Councillors. Cllr Laura McCarthy was first elected in 2018 and re-elected in 2022, and Cllr Richard Long was elected in 2021. 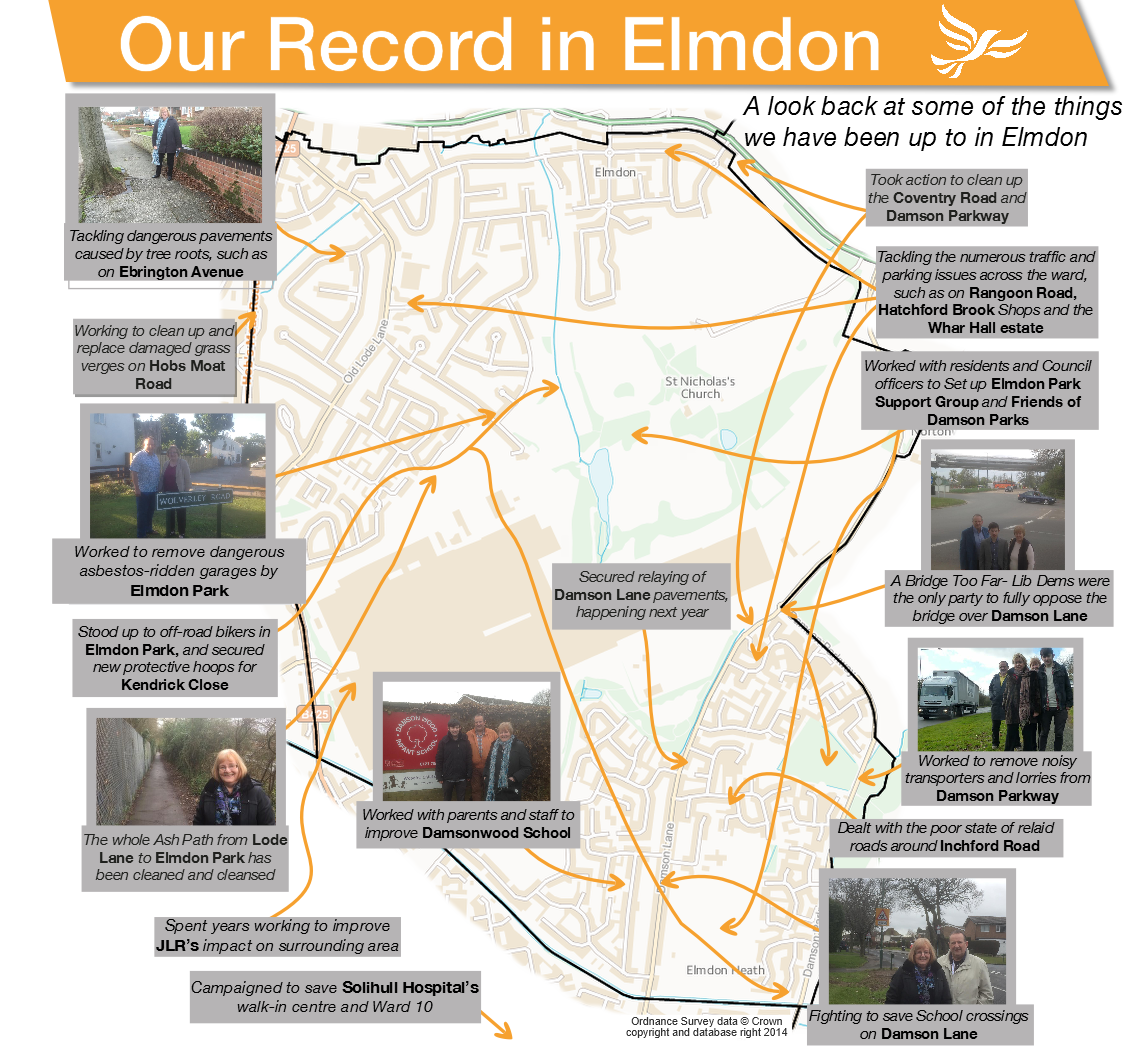 In Elmdon we have a strong team of local volunteers who regularly deliver our Focus leaflets, at no cost to the taxpayer. With these leaflets we keep everyone in Elmdon up to date with local news, campaigns by our Councillors and ways to get in touch. The latest editions can be viewed below. 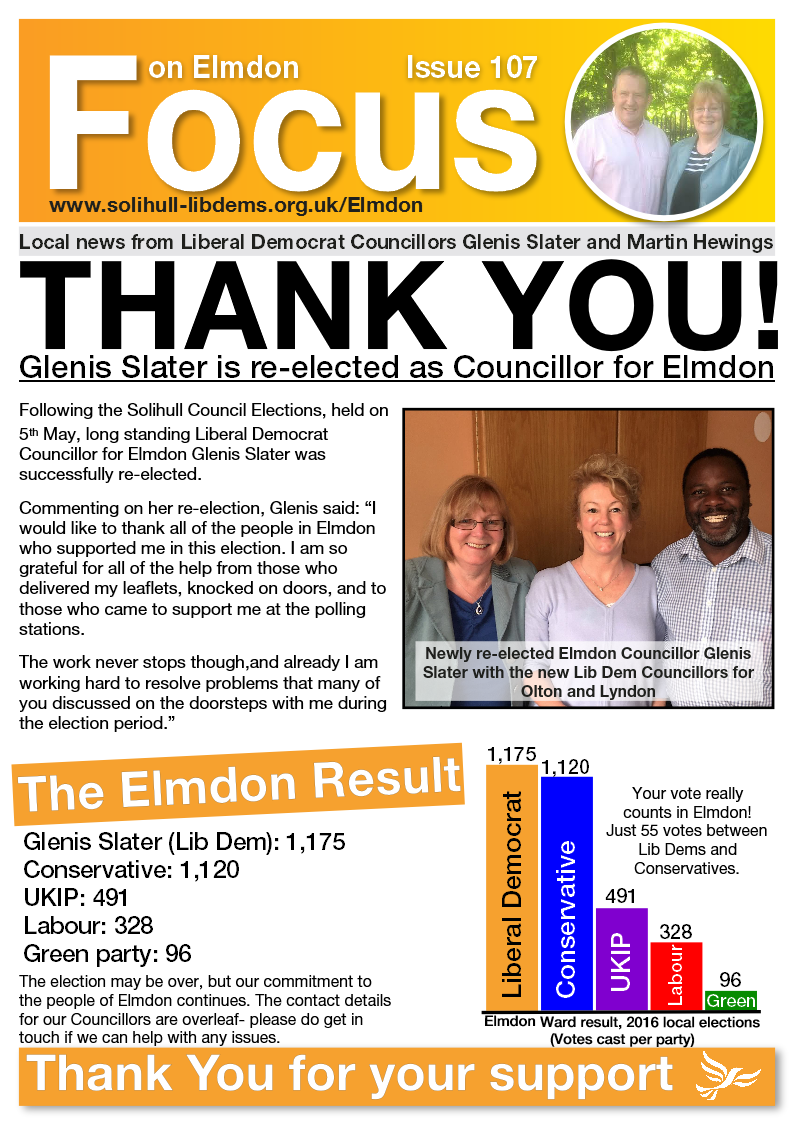 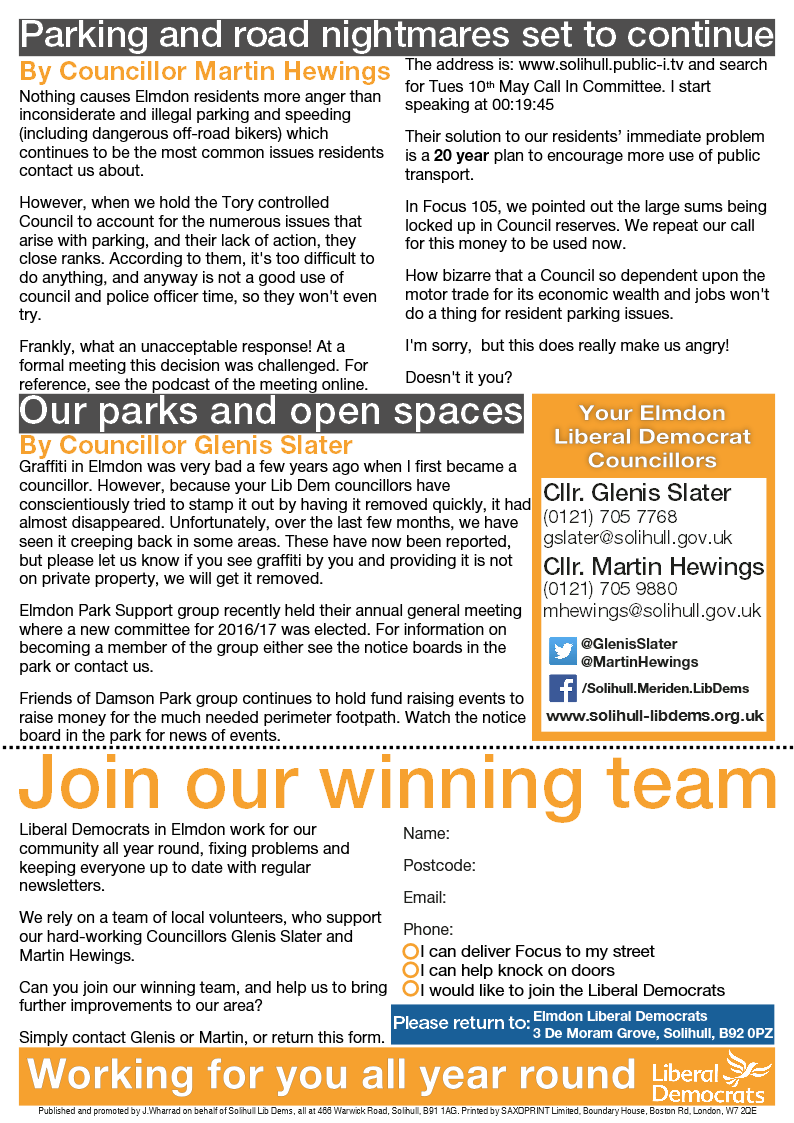 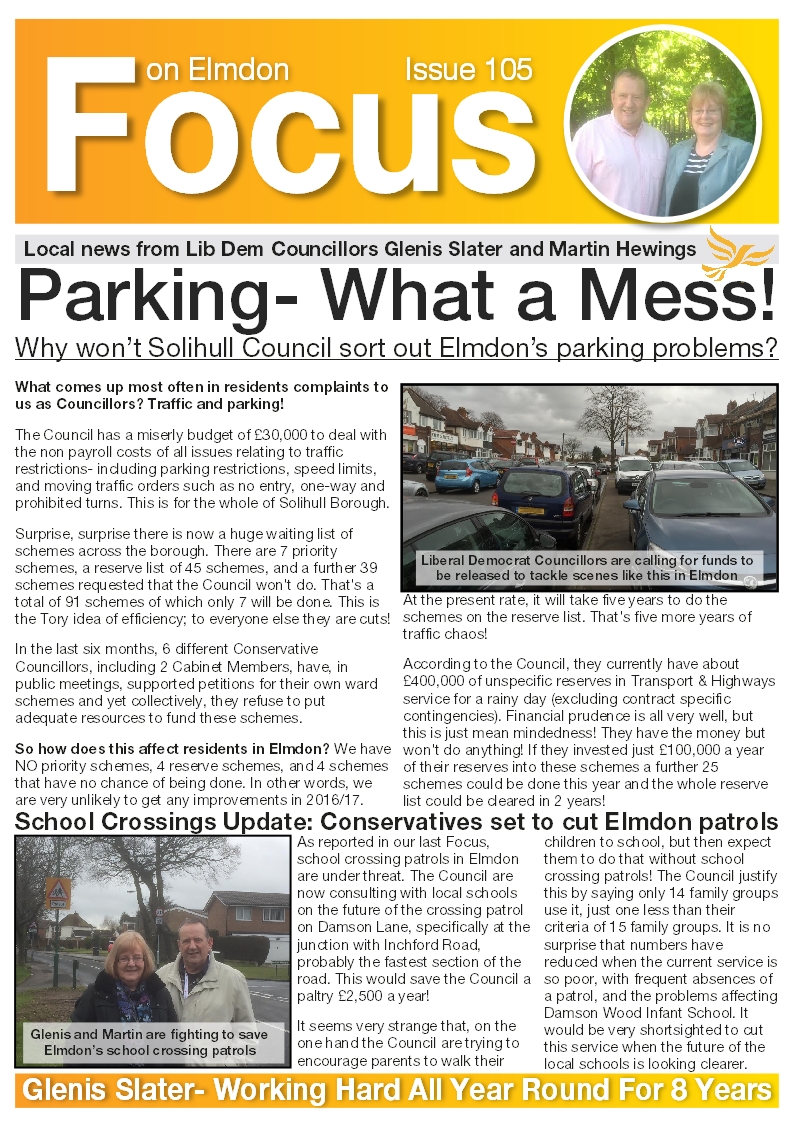 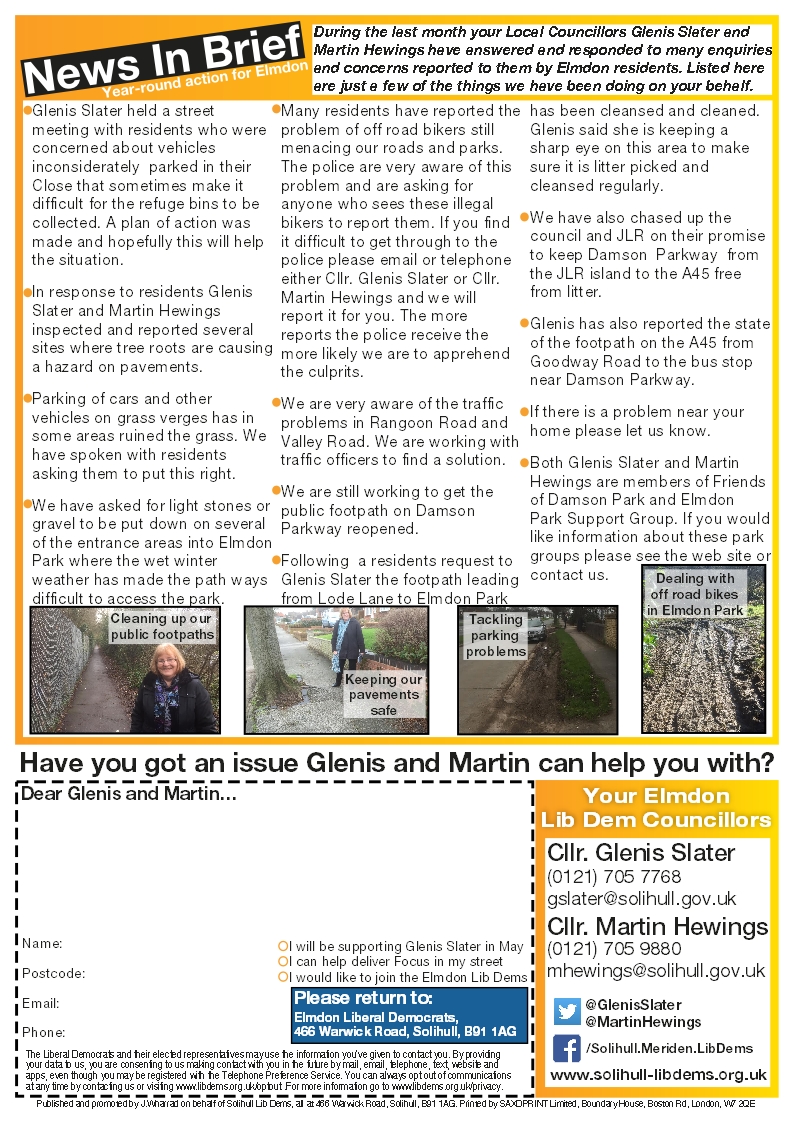